Many diseases and health conditions are genetic, meaning they are related to your pet’s breed.  That does not mean your dog will have these problems; it just means that they are more at risk than other dogs. We will describe the most common issues seen in Labrador Retrievers to give you an idea of what may come up in their future. Of course, we can’t cover every possibility here, so always check with us if you notice any unusual signs or symptoms.

Obesity can be a significant health problem in Labrador Retrievers. It is a serious disease that may cause or worsen joint problems, metabolic and digestive disorders, back pain and heart disease. Though it’s tempting to give your pal food when they looks at you with those soulful eyes, you can “love her to death” with leftover people food and doggie treats. 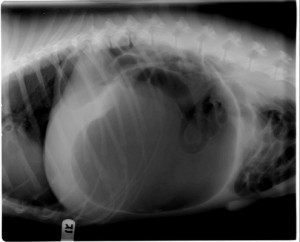 Gastric Dilatation and Volvulus, also known as GDV or Bloat, usually occurs in dogs with deep, narrow chests. This means your Labrador is more at risk than other breeds. When a dog bloats, the stomach twists on itself and fills with gas. The twisting cuts off blood supply to the stomach, and sometimes the spleen. Left untreated, the disease is quickly fatal, sometimes in as little as 30 minutes. Your dog may retch or heave, act restless, have an enlarged abdomen, or lie in a prayer position (front feet down, rear end up). Preventive surgery in which the stomach is tacked down or sutured in place so that it is unlikely to twist is an option. If you see symptoms, take your pet to an emergency hospital immediately!

Your Lab is more likely than other dogs to have a liver disorder called portosystemic shunt (PSS). Some of the blood supply that should go to the liver goes around it instead, depriving the liver of the blood flow it needs to grow and function properly. This means their liver cannot remove toxins from their bloodstream effectively.

Your Labrador Retriever is prone to a chronic liver disease, called hepatitis, starting when they are middle-aged. We usually diagnose it with blood testing and liver biopsy, and we treat it with medication and special diets. Signs of liver disease do not usually occur until most of the liver is already damaged or destroyed. Early detection and intervention with routine blood screening allow us to detect this problem at an earlier, more treatable stage.

Your Labrador Retriever is prone to a bleeding disorder called hemophilia. We’ll conduct diagnostic testing to assess their blood clotting time before we perform surgery. This is an important test, as we may not know your pet has this disorder until severe bleeding occurs during surgery or after a serious injury.

A number of different musculoskeletal problems have been reported in Labrador Retrievers. While it may seem overwhelming, each condition can be diagnosed and treated to prevent undue pain and suffering. With diligent observation at home and knowledge about the diseases that may affect your friend’s bones, joints, or muscles you will be able to take great care of them.

Both hips and elbows are at risk for dysplasia, an inherited disease that causes the joints to develop improperly and results in arthritis. Stiffness in your Labrador’s elbows or hips may become a problem, especially as they mature. You may notice lameness in their legs or they have difficulty getting up from lying down. We can treat the arthritis—the sooner the better—to minimize discomfort and pain. We’ll take X-rays of your dog’s bones to identify issues as early as possible. Surgery is sometimes a good option in severe and life-limiting cases. Keep in mind that overweight dogs may develop arthritis years earlier than those of normal weight, causing undue pain and suffering!

A torn cranial cruciate ligament is a common injury in active dogs, which includes your Lab. Usually, surgical correction is done to stabilize the knee and help prevent crippling arthritis. Physical therapy and multimodal pain management are necessary to get the best outcome. Keeping them at the right weight, feeding a high-quality diet, and avoiding too much twisting of the knees (like playing Frisbee) is key in avoiding this painful injury.

When Labrador puppies are allowed to grow too quickly, the cartilage in their joints may not attach to the bone properly. This problem is known as osteochondritis dissecans or OCD. If this occurs, surgery may be required to fix the problem. It’s best to stick to our recommended growth rate of no more than four pounds per week. Don’t overfeed and don’t supplement with additional calcium. Feed a large-breed puppy diet rather than an adult or a regular puppy diet. Weigh your puppy every three to four weeks.

A genetically linked neurological condition that could occur in your Labrador Retriever causes a wobbly, drunken gait. This condition, known as wobbler disease or wobbler syndrome, happens because there is a narrowing of the vertebrae in the neck, which pinches the spinal cord and associated nerves. If the nerves do not send signals to the brain the way they are supposed to, your dog cannot feel their feet. The first signs you will often notice are unstable hind legs, stumbling, and sometimes falling. Medications, neck braces, rehabilitation exercise programs, and surgery are treatment options.

Diabetes mellitus is a fairly common disease in dogs. Any breed can be affected, but Labs have an above average incidence. Dogs with diabetes are unable to regulate the metabolism of sugars and require daily insulin injections. It is a serious condition and one that is important to diagnose and treat as early as possible. Symptoms include increased eating, drinking, and urination, along with weight loss. If they shows signs, we will conduct lab tests to determine if they have this condition and discuss treatment options with you. Treatment requires a serious commitment of time and resources. Well regulated diabetic dogs today have the same life expectancy as other canines.

In humans, an allergy to pollen, mold, or dust makes people sneeze and their eyes itch. In dogs, rather than a sneeze, allergies make their skin itchy. We call this skin allergy “atopy”, and Labradors often have it. Commonly, the feet, belly, folds of the skin, and ears are most affected. Symptoms typically start between the ages of one and three and can get worse every year. Licking the paws, rubbing the face, and frequent ear infections are the most common signs. The good news is that there are many treatment options available for this condition.  Food allergies are also common in these breeds,

Hemangiosarcoma is a type of bleeding tumor that affects Labrador Retrievers at greater than average incidence. These tumors commonly form in the spleen but can form in other organs as well. Unbeknownst to a pet owner, the tumor breaks open and internal bleeding occurs. Some tumors can be volleyball-sized or larger before signs of sickness show. We often find clues that one of these tumors is present during senior wellness testing, so have his blood tested and an ultrasound performed at least yearly.

Lymphoma or lymphosarcoma is a type of cancer that afflicts Labrador Retrievers more than other breeds. This disease makes the body form abnormal lymphocytes, which are a type of white blood cell. Because white blood cells can be found throughout the body, this cancer can show up almost anywhere. Lymphoma is a very treatable form of cancer, with an excellent success rate in dogs receiving chemotherapy. Treatment can be costly, however, and is a lifelong commitment. Luckily, lymphoma is one of the few types of cancer that can often be found with a blood test, so we may recommend a complete blood count twice yearly. Watch for swollen glands (ask us, we’ll show you where to look), weight loss, or labored breathing at home and be sure to call us if you notice any unusual symptoms.

Cushing’s Disease is a malfunction of the adrenal glands causing them to produce too much steroid hormone. This is a common problem in dogs, and your Lab is more likely than other dogs to be affected. The condition usually develops slowly, and the early signs are easily missed. Symptoms include drinking and urinating more than normal, increased appetite and reduced activity level. Later, a potbelly, thin skin, and hair loss are characteristic. Treatment usually includes oral medications and requires close coordination with us to ensure correct dosing.

There are three types of seizures in dogs: reactive, secondary, and primary. Reactive seizures are caused by the brain’s reaction to a metabolic problem like low blood sugar, organ failure, or a toxin. Secondary seizures are the result of a brain tumor, stroke, or trauma. If no other cause can be found, the disease is called primary, or idiopathic epilepsy. This problem is often an inherited condition, with Labrador Retrievers commonly afflicted.  They will usually begin between six months and three years of age. An initial diagnostic workup may help find the cause. Lifelong medication is usually necessary to help keep seizures under control, with periodic blood testing required to monitor side effects and effectiveness.

Exercise Induced Collapse, or EIC, is just what it sounds like – a young, apparently healthy Labrador collapses to the ground suddenly while exercising. In a few minutes, the weakness passes and they can get up again. Affected dogs cannot run for too long, especially in hot weather, so a day of hunting or strenuous hiking is probably not a good idea. Heat stroke can occur along with EIC. Limiting exercise is the only treatment and pet parents should be vigilant to avoid overheating. Genetic testing can be done to diagnose the disease and to screen dogs before breeding.

Labrador Retrievers may develop a disease of the muscles, called myopathy, somewhere between three and seven months old. Physical signs include bunny hopping, loss of muscle tone in the limbs, a stiff gait, or carrying the head low. If we suspect that your dog has this disease, we’ll conduct tests to be sure. Most dogs with myopathy are stabilized by twelve months of age, have a normal lifespan, and are suitable as house companions: no hunting or working!

What to Watch For

Any abnormal symptom could be a sign of serious disease, or it could just be a minor or temporary problem. The important thing is to be able to tell when to seek veterinary help, and how urgently. Many diseases cause dogs to have a characteristic combination of symptoms, which together can be a clear signal that your Labrador Retriever needs help.

Seek medical care immediately if you notice any of these types of signs:

About the Author: meadowlands