The American Lone Star Tick….A Major Health Concern For You and Your Dog

When most people think of ticks in New Jersey, they think black-legged ticks (deer ticks, Ixodes scapularis), which transmit Lyme disease, or American dog ticks (Dermacentor variabilis), both often found on canine companions. The lone star tick (Amblyomma americanum) has been a problem in the southern part of the state and there are indications it may be moving north.

The lone star tick, like black-legged and American dog ticks, is a hard-bodied tick with four life stages: egg, larva, nymph, and adult. Typical of all hard ticks, each active stage feeds only once. All stages of lone star tick feed on deer, but larvae and nymphs have also been found on small- to medium-sized mammals, passerine birds, and turkeys. In New Jersey, lone star adults are active from April to mid-June; nymphs are active from April to July, and larvae are active from July to Sept. Thus, unlike black-legged ticks that have stages active even in the fall and dead of winter, lone star tick activity is concentrated during spring and summer. 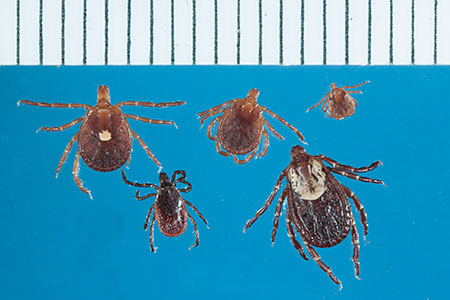 Most ticks simply crawl up to a high point on vegetation, stretch out their front legs, and wait for a host to walk by and brush against them so they can latch on.  Lone star ticks can actively pursue hosts following CO2 trails and are aggressive biters. All stages of this relatively large tick bite humans, and since they have significantly longer mouthparts than American dog ticks and their bites are deep and usually cause a mild allergic reaction (red, itchy lesion) at the bite site within the first 48 hours after attachment.

Besides being a painful nuisance, lone star ticks can also transmit disease-causing organisms to humans. In New Jersey, the most prominent infectious agents transmitted by lone star ticks are the bacteria that cause ehrlichiosis, Ehrlichia chaffeensis, which causes human monocytic ehrlichiosis (HME) and the milder Ehrlichia ewingii. Symptoms of either ehrlichiosis, like those of many tick-borne bacterial infections, include fever, headache, and muscle pains, though not all who are infected will have symptoms. Development of a rash is less common with HME than with Lyme disease or Rocky Mountain spotted fever, and the rash, if it develops, is variable in location and form, and not distinctive. Ehrlichiosis is usually treated with antibiotics, and while the prognosis is good if caught early, the risk of complications increases if left untreated and it can be fatal, primarily among the very young (children less than 5 years), elderly (more than 70 years), and those with immune deficiencies.

In addition to the agent of ehrlichiosis, the lone star tick can carry Rickettsia amblyommatis, a bacteria similar to Rickettsia rickettsii, the agent of Rocky Mountain Fever, as well as Francisella tularensis, the agent of tularemia, and a few other pathogens not known to occur in New Jersey, such as Heartland virus.

Of note, a further danger of being bit by a lone star tick is the development of an allergy to red meat, specifically to the polysaccharide alpha-galactose (abundant in red meat) that is triggered by a component of the lone star tick saliva. Symptoms of red meat allergy occur several hours after ingesting food and include upset stomach, diarrhea, hives, itching, and/or anaphylaxis (sudden weakness; swelling of the throat, lips, and tongue; difficulty breathing; and/or unconsciousness, evidence reviewed in Steinke et al. 2015).

Companion animals are also at risk from the lone star tick. The same bacteria that causes ehrlichiosis in humans can also infect dogs. Cats can contract “bobcat fever” from lone star ticks, caused by a protozoan called Cytauxzoon felis.

Avoiding lone star ticks is the best prevention against their bites and transmissible pathogens. As with all ticks, when spending time outdoors, do not walk through or sit down in tall vegetation or unmowed grass. When walking through the woods and natural areas, stay on roads and trails.  The use of repellents are recommended, be sure to only use pet approved products.

Another important step to avoid tick-borne disease is to conduct frequent tick checks.  Body areas to especially focus on are the scalp, behind the ears, armpits, ankles, and groin. Nymphs and larvae can be quite small, the size of a poppy seed or smaller.

Common landscape management techniques recommended for tick control include keeping the grass mowed, removing leaves and brush, deer exclusion, and installation of a wood chip barrier between lawn and woods. However, these methods have yet to be formally tested against lone star ticks.

If you have found a tick on your pet or have observed any tick-related symptoms please call Meadowlands Veterinary Hospital at 201-646-2008 or visit us at www.meadowlandsvethospital.com