You may have also noticed these characteristics:

About the Siberian Husky

Quick and nimble-footed, Siberians are known for their powerful but seemingly effortless gait.  Their almond-shaped eyes can be either brown, blue, or both.  As born pack dogs, they enjoy family life and get on well with other dogs.  However these energetic dogs can’t resist chasing small animals.  They are smaller and lighter than their burly cousin, the Alaskan Malamute, weighing in at around 60 pounds.

Siberian Huskies are considered a “natural” breed. They are remarkably self-cleaning, less smelly, and often need only a few baths a year, unless being shown.  Weekly brushing will help keep the coat and skin in good condition. Siberians have a double coat—an undercoat, and guard hair. The undercoat is shed twice a year, and it is important to continually “rake out” the old coat.

They are a social breed that craves close human contact and due to their social nature they do not make good watchdogs. Siberian Huskies are intelligent and have a innate desire to work; they are highly active and require vigorous exercise and space to run. Huskies make excellent jogging partners in cool weather!  They are not much of a barker, but can be a communal howler especially when bored or under-exercised. The Siberian Husky is a generally healthy breed with an average lifespan of 11-14 years.

The Siberian Husky’s compact body, well-furred coat, erect ears, and thick, sickle-shaped tail suggest the breed’s northern heritage. The Siberian Husky originated in Siberia and was first imported to Alaska in 1909 for use as a sled dog. Original breeding of Huskies by the Chukchi people of northeast Asia focused primarily on dogs with great endurance and tolerance of harsh climates.

When changing climate conditions forced the semi-nomadic Chukchi to expand their hunting grounds or perish, they rose to the challenge by developing a sled dog capable of hauling light loads over vast expanses of frozen wasteland in sub-zero temperatures, with a minimum expenditure of energy. The Chukchi, isolated by from the rest of the world, were able to maintain the purity of their sled teams for many generations. The dogs they developed were the direct sires of today’s Siberian Husky.

Siberians caught the eye of the public when they began winning sled races in the early 1900s.  They made headlines in 1925 when a legendary musher Leonhard Seppala led a relay of Siberian Huskies 658 miles in only five and half days to rush a lifesaving serum to Nome, Alaska, where an epidemic of diphtheria had broken out. The thrilling “serum run,”  was reported in newspapers around the world. Balto, who was Seppala’s lead dog on the final leg of the journey, remains one of the most honored hero dogs in canine history.

Mushers still keep packs of sledding Siberians for fun and sport throughout North America. Less adventurous devotees of the breed simply enjoy the company of this sociable, gentle companion.

Please contact Meadowlands Veterinary Hospital at 201-646-2008 for all your Siberian Huskey questions or join us on Facebook @Meadowlandsvet1 for our Breed of the Month contest. 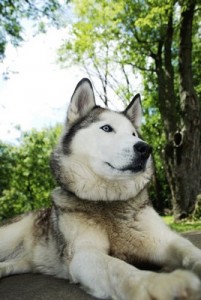