These blogs are not to cause concern for Husky owners, rather to make them aware of potenital issues that are found more commonly in Siberian Huskies than some other breeds.  However, genetic predisposition does not mean certainty of any of the conditions listed below.

Cataracts: Symptoms include a grey, cloudiness in the lens portion of the eye and is a common cause of blindness in older Huskies.

Glaucoma: Symptoms include squinting, watery eyes, bluing of the cornea, and redness in the whites of the eyes. Pain is rarely noticed by pet owners, but is usually pretty severe.

Corneal dystrophy: is an inherited condition in Siberian Huskies that causes small white crystal deposits to form in one of the layers of the cornea. Usually the disease progresses slowly, is non painful, and causes only minor vision obstruction.  It can cause partial or complete blindness in rare cases and there is no effective treatment.

Heterochromasia: different eye colors, usually 1 blue and 1 brown.  Does not cause any physical abnormalities

There are three types of seizures in dogs: reactive, secondary, and primary. Reactive seizures are caused by the brain’s reaction to a metabolic problem like low blood sugar, organ failure, or a toxin. Secondary seizures are the result of a brain tumor, stroke, or trauma. If no other cause can be found, the disease is called primary, or idiopathic. This problem is often an inherited condition, with Siberian Huskies commonly afflicted. They will usually begin between six months and three years of age.

Laryngeal Paralysis in which the vocal cords become paralyzed and hang down into the airway.

Some breeds like your Husky can be born with a variety of heart defects and symptoms include tiring easily, coughing, a swollen belly, or fainting.

Cancer is a leading cause of death in older dogs.  Tumors, both benign and cancerous, can look like anything. This red swelling on the skin surface is a cancer known as a Mast Cell Tumor.

Hip dysplasia an inherited disease that causes the hip joints to form improperly and leads to arthritis.   Symptoms include lameness in their hind legs and/or difficulty getting up from lying down.

Inflammatory Bowel Disease or IBD is an immune system disorder in which the intestinal lining becomes overrun with immune system cells called lymphocytes and plasmacytes. The stomach and/or intestinal lining becomes thickened affecting his ability to absorb nutrients properly. Chronic vomiting or diarrhea is common or it may flare up suddenly and then improve again for a time. Stress, diet change, or intestinal parasites may make it worse.

Degenerative Myelopathy is a neurologic condition, similar to ALS or Lou Gehrig’s Disease in people, that causes weakness and poor nerve function in the hind legs.

Pemphigus foliaceus is a superficial skin disease that  often starts at around four years of age and causes crusts and hair loss, usually on top of his nose and inside the ear flap. Some dogs can get it on their footpads and toenails. Bacteria usually invade the damaged area, so secondary skin infections are common. Skin crusts typically wax and wane; there is no cure, but there are a variety of effective treatments. Sunlight makes it worse, so apply zinc-free sunscreen to sensitive parts before heading outdoors. 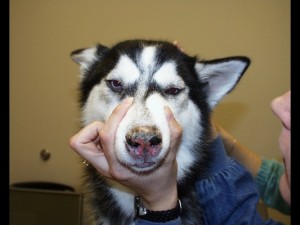 Uveodermatological syndrome is a complex autoimmune disorder in which the immune system attacks the cells that make pigment in the skin and inside the eyes. It can cause pain or blindness inside the eye and the pigmented areas of his nose, lips, and skin to change from dark to light. Sunlight makes the condition worse.

Zinc-responsive dermatosis is a form of skin infection caused by not enough zinc in their diet or it doesnt absorb properly. Signs include red, hairless, crusting, scaling, or oozing skin around the mouth, chin, eyes, and ears or lesions on the foot pads and nose.

Hypothyroidism or low thyroid hormone can cause dry skin and coat, hair loss, susceptibility to other skin diseases, weight gain, fearfulness, aggression, or other behavioral changes.

Ectopic Ureters can cause urine leaking.  The ureters are small tubes that allow urine created in each kidney to flow into the bladder. Occasionally one of these tubes hooks up in the wrong place, taking urine past the bladder. The bladder normally stores urine and empties on command but urine that doesn’t spill into the bladder will just drip out on its own.

Hyperphosphatemia describes an elevated level of an enzyme called alkaline phosphatase, or ALP, in the bloodstream although usually causes no sign of illness.

If you have questions about your Husky or would like them thoroughly examined contact Meadowlands Veterinary Hospital at 201-648-2008 or visit us at http://www.meadowlandsvethospital.com