The blood sport of  “bull baiting” began over 1,000 years ago in England.  The American Pitbull Terrier was brought to the United States by immigrants from England, Ireland, and Scotland during the 19th century. Due to public outrage, bull baiting was banned in England in 1835. Bulldog breeders and owners then moved to the sport of “ratting,” where a number of rats were placed into a pit and wagers were made on how many rats the dog could kill in a certain time period. To increase agility, quickness and prey-drive in the bulldog, ratters crossed the breed with terriers. Essentially, it was the sport of ratting that combined the bulldog and terrier into the modern day pit bull terrier.  In America, selective breeding increased their weight and enlarged their jaws, giving them a more powerful-looking head.  On the heels of ratting, dogfighting developed. Pit bulls and dogfighting were exported to America as settlers made their way to the New World.  Dog fighting still exists today and these poor dogs are still a favorite choice for these brutal events. You may have also noticed these characteristics:

Dental disease is the most common chronic problem in pets, affecting 80% of all dogs by age two. And unfortunately, your American Pitbull Terrier is more likely than other dogs to have problems with their teeth. It starts with tartar build-up on the teeth and progresses to infection of the gums and roots of the teeth. If it is not prevented or treated, your buddy will lose their teeth and be in danger of damaging their kidneys, liver, heart, and joints. In fact, your American Pitbull Terrier’s life span may be cut short by one to three years!

American Pitbull Terriers are susceptible to bacterial and viral infections — the same ones that all dogs can get — such as parvo, rabies, and distemper. Many of these infections are preventable through vaccination. 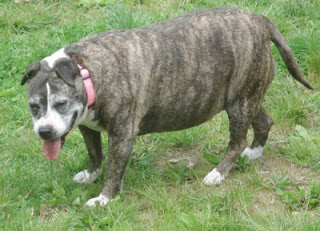 Obesity can be a significant health problem in American Pitbull Terriers. It is a serious disease that may cause or worsen joint problems, metabolic and digestive disorders, back pain and heart disease.

All kinds of worms and bugs can invade your Pit’s body, inside and out. Everything from fleas and ticks to ear mites can infest their skin and ears. Hookworms, roundworms, heartworms, and whipworms can get into their system in a number of ways: drinking unclean water, walking on contaminated soil, or being bitten by an infected mosquito. Some of these parasites can be transmitted to you or a family member and are a serious concern for everyone. For your canine friend, these parasites can cause pain, discomfort, and even death. Preventive medication is recommended to keep them healthy. 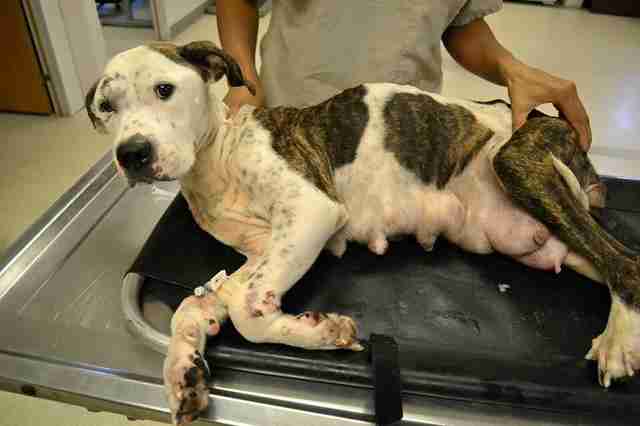 One of the best things you can do for your Pitbull is to have them spayed (neutered for males). In females, this means we surgically remove the ovaries and usually the uterus, and in males, it means we surgically remove the testicles. Spaying or neutering decreases the likelihood of certain types of cancers and eliminates the possibility of your pet becoming pregnant or fathering unwanted puppies.

Build routine care into your schedule to help your Pit live longer, stay healthier, and be happier during her lifetime. We cannot overemphasize the importance of a proper diet and exercise routine.

What to Watch For

Any abnormal symptom could be a sign of serious disease, or it could just be a minor or temporary problem. The important thing is to be able to tell when to seek veterinary help, and how urgently. Many diseases cause dogs to have a characteristic combination of symptoms, which together can be a clear signal that your American Pitbull Terrier needs help.

Give us a call for an appointment if you notice any of these types of signs:

Seek medical care immediately if you notice any of these types of signs: